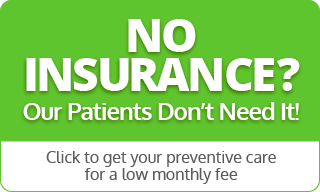 Dentures have been around for a surprisingly long time. Nearly as long as civilization, as far as the archaeologists have been able to tell. Each culture understands the need to replace missing teeth, so many different methods have been created.

There are examples of primitive dentures made from human teeth and gold wire dating back from 1500 B.C. in Egypt and Mesopotamia. Similar dentures were found from 700 B.C. Italy, but with animal teeth used to supplement the human ones. People in ancient Maya used to carve teeth from seashells, stone, and bones as tooth replacements. They would insert these false teeth directly into the sockets of missing teeth. While that sounds painful, it seems to have worked well, as the materials would fuse directly with the bone.

As time marched on and the 18th Century was getting under way, dentures became more sophisticated. The began to be carved from ivory, bone, and had animal and human teeth. In fact, the story about George Washington’s teeth being made from carved wood and being extremely uncomfortable isn’t really true. Washington was able to afford the highest-quality dentures, which were made with hippo ivory, and used carved donkey and horse teeth in addition to human teeth.

Around 1774, a man attempted to revolutionize denture construction. A man named Alexis Duchateau crafted a pair of dentures from porcelain. Unfortunately, the material he used wasn’t all that durable, and the whiteness looked unnatural, so they weren’t widely used. The most popular dentures of the time were made from normal teeth pulled from dead soldiers or sold by people desperate for money. They were called “Waterloo teeth.”

Sometime around 1820, a goldsmith from Westminster, England, named Claudius Ash had a breakthrough when he mounted a new kind of porcelain tooth in gold plates. These new dentures were much more beautiful than any before and more comfortable as well. His denture company did very well and Ash continued to experiment. In 1850, he created the first dentures that used rubber as the foundation. These Vulcanite rubber dentures became the most popular dentures until modern acrylic and plastic dentures were created in the mid-1900’s.

If you would like to make a denture consultation with Dr. Sula, contact Advantage Dentists in Katy, Texas, today.